I was once told that, until a few decades ago, if you took a winter walk along the coastal path from Dundee to Arbroath you’d see gardens and allotments covered with a thick black  blanket of seaweed.

This was a time when artificial fertilisers hadn’t been developed. Besides, it was free way to improve your soil. Another bonus is that it is organic. Seaweed, of course, is still spread on fields in Jersey today, and it is thought that helps give the new potatoes a distinctive salty tang.

I have been using it for years on the allotment, but mostly to make a particularly stinky liquid feed. Fill a water-butt with one-third seaweed, two-thirds water, and leave to ferment for three months. The smell is so bad that I make watering my last job of the day, and then scarper, leaving grumpy fellow growers to curse and spit. 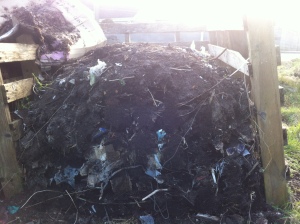 My compost heap. Two years in the making

Last year, though, I copied the Jersey farmers, and spread a thick layer on the potato bed. The resulting crop was, by far, the best ever, with around 100lb of spuds. Was the seaweed responsible? Who knows, but when you only get one shot at a crop per year, I wasn’t willing to play around with a potentially successful formula.

Today I took a ton bag down on the beach, and, attracting quite a few glances, gathered up enough to cover the potato bed. Collecting seaweed is one of my least favourite jobs, primarily because you have to drag the heavily laden bag along the beach, up a flight of steps and into the car. I hate it. But it only took me two trips this time and an hour-and-half to get it done.

Once spread over the bed, I covered the weed with a layer of my own compost. I should really sieve the stuff first, to get out the non-biodegradable bits, but I just chucked it on, leaving the bed peppered with scraps of plastic, parcel tape, polystyrene and other detritus. I’ll pick them out as I plant.

On a more general note, this is the first day of spring, and the weather was sensational. It was such a joy to be outside. The raspberry canes are starting to bud, and I saw a couple of brilliant red  rhubarb shoots just peering out of the ground.

Seemingly it is going to get warmer next weekend, and the weatherman says it will start to feel like spring. I may feed my bees to give them a strong start to the year.

One other thing before you go: I cracked open the first of my home-brew beers on Thursday. Surprisingly, it was very fine. I went easy that night, drinking only two bottles, to see if my guts agreed. They did. Janek likes the beer too, and seems to having one with just about every evening meal. Kurt also enjoyed it when he popped over for a visit, and returned to his flat with half a dozen bottles. Must make more!