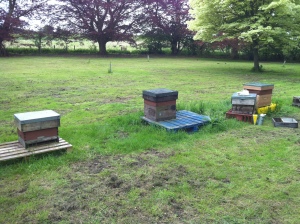 The final stages of the second artificial swarm

My beekeeping this year has been characterised by one thing — a lack of preparation. Several times, I have been caught on the hop as the demands of my colonies have forced more than a few urgent trips down to Thornes to stock up on supplies.

The year started slowly enough, and it was May before I had a proper peak inside my two hives. All seemed to be fine. However, when my mentor had a look a week or so later, he noticed one hive was producing queen cells. This means one of two things — either the old queen is dead or missing (she wasn’t) or my hive was going to swarm.

It was time to take action.

Last year when my hives made queen cells, I simply cut them out and killed them. Not only is it unpleasant, it’s also bad practice. Instead, what I should be doing is creating an “artificial swarm”. It’s quite a complicated procedure which is very well explained here. Essentially, you are encouraging your hive to swarm, but in a way that is completely under your control. It should (in theory) stop the colony’s urge to swarm for the rest of the year, plus it you get an extra hive!

So, now I had three colonies, and I was squeaking with excitement. In the meantime, though, my second hive also started to produce queen cells. Once again, I had to carry out an artificial swarm. This time it was under the guidance of Susan, a former beekeeper. She uses the Heddon Method, and all of a sudden I had four hives!

It had all gone very well (or so I thought at the time), and my four hives were growing quickly. Not only that, but the bees in the two original hives had filled up every available space in their brood box, and I had to put supers on. Supers are extra boxes which you put on top of your hive, which the bees expand into and fill with (hopefully, surplus) honey, which you will pinch at a later date. Finally, they were earning their keep.

Last year, I kept the super on one hive for the entire summer, and I got 10lbs of honey. However, before I knew I knew it the two supers this year became extremely heavy. This is was almost entirely due to the fields of oilseed rape nearby. These plants are relatively new to our countryside, but have had a huge effect on beekeeping. They flower early in the year, and give the bees a huge source of nectar. The resulting honey is very mild, and not for the honey snob. Think of it as the lager of honey.

It also crystallises very quickly into a solid lump, and has to be extracted as soon as poss. My mentor very kindly offered to do this for me, and I ended up with 33lbs of the stuff! “You have now become a proper beekeeper,” he said, to my great delight. 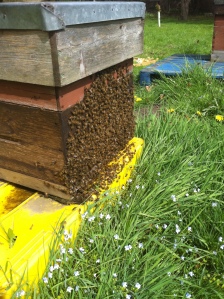 Unhappy bees annoyed at me for opening their hive

Looking in the bucket where the honey had collected, I couldn’t help but fill up with pride. Here was enough honey for everyone. Some to give to friends and family, and loads left over. And it tasted lovely. The intense sweetness was cut through with a slight lemony edge, which apparently comes from the sycamore trees next to my hives.

Things couldn’t have been better. Until, that is, the next inspection of my hives. The two new colonies were thriving, but the two that had supplied me with the honey seemed queenless. Couldn’t figure it out at all, and so once again I called in the help of my mentor, who confirmed that the original queen in the hive I had split with Susan had gone AWOL. Had she died? Did she swarm? I don’t know.

As for the other hive — the queen was there, but had sneaked into the super, where she was laying eggs. Can’t be sure how that happened, but I do have a vague recollection that I forgot to put the queen excluder on for a few minutes, so I guess it must have been then.

I had two options: either try rearing a new queen by taking a frame of eggs from a good hive into the queenless one. Or reunite the two hives. My intention this year is to take the bees up to the glens to get heather honey, and for that you really need hives which are as stuffed full of bees as poss. So, it seemed the best solution was to unite the two original hives, and then I’d have three for the glens.

This was started last week by moving the two hives closer together slowly one foot a day. Having done this, I have now put the two hives on top of each other separated by a sheet of newspaper. The thinking behind this is that by the time the bees have eaten through the paper separating them, they will have become used to each other’s smell, and won’t treat each other as hostile.

Has it worked? I will find out tomorrow.