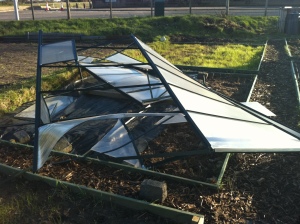 Just visited my allotment three hours ago, to be greeted by the scene above.  My brand-new greenhouse is in ruins and is only fit for landfill. £459 and a huge amount of work by Kurt and myself has gone down the drain. It’s a major, major setback.

What caused it, I don’t know. It was only put up two weeks ago, and so I immediately suspected the winds. However, if that was the case, then the tumbling greenhouse would have torn up one of the beds and damaged a bench I had placed beside it. Both were untouched. I began to suspect vandals, and called out the police. They popped round pretty quickly, and were sympathetic, but doubted my theory as nothing else was damaged at the site. Besides, they said, vandals rarely congregate there. They did, however, admit that the whole incident was puzzling and “bizarre” and they are going to ask around and get back to me.

Either way, it’s obvious that a greenhouse is not viable on the site, and I am extremely fed-up about the whole thing. I had great plans to grow tomatoes and cucumber, and start of all my seedlings for the allotment and even for the garden at home. It was going to be the powerhouse for my plot. 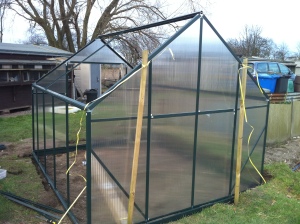 How it looked two weeks ago

If it was the wind that caused the devastation, then I also feel slightly silly. Should I have known better? Was I naive? Who knows?

Kurt and I spent all the daylight hours of the weekend before last putting it up, and it was an extremely fiddly job. Once it was half up, the strong winds hit. But they only blew out one pane which I hadn’t inserted properly. So, how come the whole thing has now been blown over?

So, what options do I have left? Only one, really. If I’m gonna have a greenhouse, it’ll have to go in the garden at home. But with two summerhouses and a shed, there ain’t a lot of space left. I’ll have to have a think. In the interim, the plastic walk-in growhouse which I put up on the lawn last year, will have to be rebuilt as a temporary solution while I sort things out.

Tomorrow, I have the depressing job of dismantling the wrecked greenhouse, and throwing it in the skip. Not looking forward to that at all.

Before that, though, I’m going to imbibe a water-butt of strong drink.